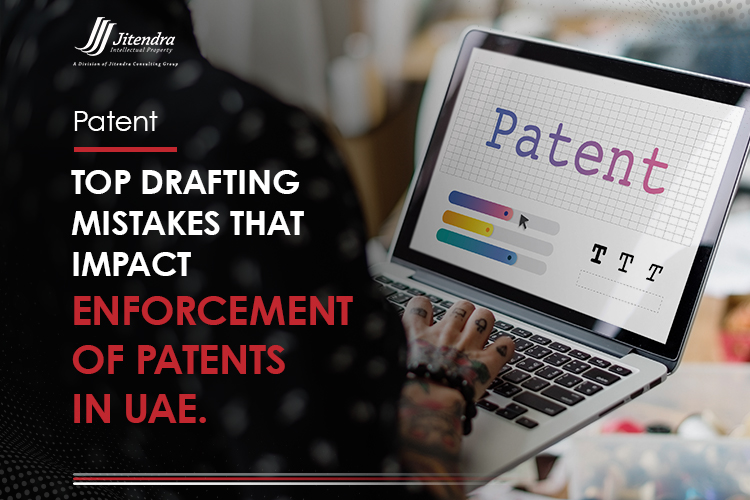 Top drafting mistakes that impact enforcement of patents in UAE

Inventors often downplay patent drafts as merely a document describing an invention in detail, leading to grave mistakes. A patent draft is a techno-legal document through which the UAE Patent Office identifies the invention and the scope of protection of the invention. A draft is a cornerstone of patent registration in the UAE and an error-ridden patent draft adversely affects the granting of a patent.

In view of this, let’s go through some of the most common mistakes that may occur while you compile a patent draft. Read ahead:

Claiming The Invention too Broadly

Rookie inventors are more prone to commit this serious mistake while writing a patent draft. In a bid to broaden the scope of their invention, inventors often attempt to claim their inventions too broadly. Their prime intention behind this weak move is to get as much protection as possible from their patent application. However, they fail to understand that it would make the scope of protection indefinite.

Claiming The Invention too Specifically

Officials at the Patent Office may raise eyebrows upon reading a patent claim that is too narrow. Inventors may claim an invention too specifically when the arrangement or method of performing the invention is too clear to them. Due to this clarity, their focus becomes too narrow and fail to envision a broader version of their invention.

For instance, inventors who made a chair with four legs may fail to see whether the chair can work with three legs. Drafting a patent claim in such a way will limit the scope of the invention to that specific count and dimension. Patent registration agents in Dubai advise inventors to consider all the possible embodiments of the invention while drafting a patent claim.

Inventors are required to use consistent terms to achieve a well-written patent draft. Claims of inconsistent terms may adversely affect you if patent litigation occurs. For instance, inventors may use terms such as ‘container’ and ‘vessel’ to define the same object. Even though such usage of a synonym is normal in a regularly published article, it would amount to inconsistency in a patent draft. Inventors should be consistent in the usage of terms and must avoid using multiple terms to define the same object. Inventors can avoid such mistakes with the help of patent registration agents in Dubai.

Drafting Claims Without Adhering to the Drafting Rules

Inventors need to follow the rules of patent registration in the UAE to write the perfect patent claim. Failing to adhere to the rules set out by the Patent Office may raise the ground for patent rejection in the UAE. Some of the most significant rules are stated below:

The process of patent registration in the UAE involves time-consuming procedures for which the inventors need professional assistance. Writing patent drafts solo or with the help of inexperienced employees may increase the chances of errors which may lead to rejection of the patent application. However, consulting with patent registration agents in Dubai such as Jitendra Intellectual Property (JIP) is the best way to avoid errors in the draft. JIP is a full-service IP firm in Dubai dedicated to protecting the IP rights of companies, individuals, inventors and big corporate groups. Our bespoke patent registration services in the UAE ensure solid patent protection for inventors.