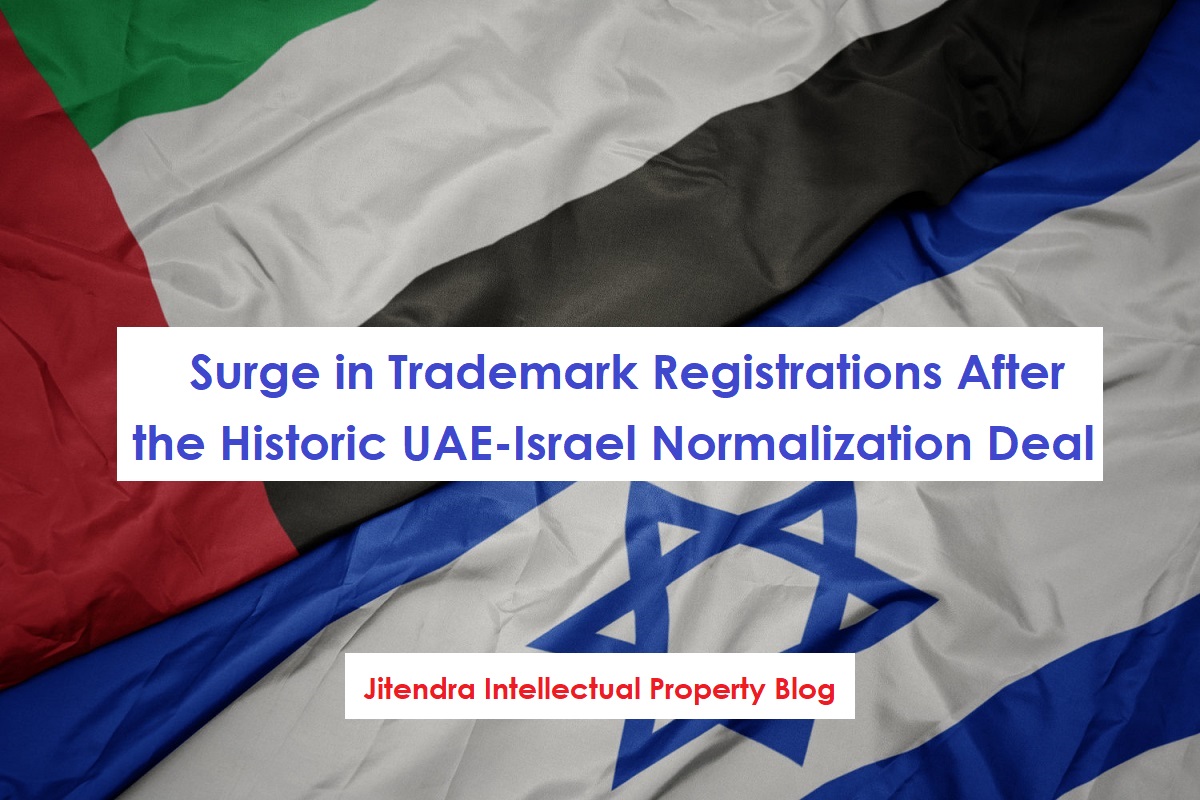 How Israel Normalization Deal Will Increase the Trademark Registrations in the UAE?

The UAE and Israel signed the Abraham Accord on 13 August 2020, which effectively normalized the ties between the two nations with the US playing as a matchmaker. On 31 August, the first commercial plane from Israel landed in Abu Dhabi, which formally sealed the tie-up between the two Middle East powers. The deal has opened up new avenues of investment, business opportunities for both the UAE and Israel.

The UAE newspapers have written articles about Israeli investors who are eyeing real estate properties in the UAE. However, the most important milestone in the timeline of the normalization process happened on 29 August when the UAE abolished the 1972 Israeli Boycott Law through a Presidential Decree. Trademark agents in Dubai believe that the scrapping of the Boycott Law would facilitate the inflow of Israeli goods into the UAE and also would lead to an increase in UAE trademark registrations.

Related: How to Register a Trademark in the UAE?

What does the Israeli Boycott Law Actually Say?

The UAE enacted Federal law No. 15 (UAE Boycott Law) in 1972 prohibiting the dealings with Israeli nationals and the trading of goods of Israeli origin. The Boycott Law specifically prohibits any persons or legal entities domiciled in the UAE to enter into an agreement (either personally or by proxy) with Israeli nationals or entities or persons domiciled in Israel.  Also, pursuant to the law, the imports, exchange, process, or trading in goods or products of Israeli origin are prohibited.

The law effectively prevented the products manufactured in Israel from entering the UAE market. If any goods or products of Israeli origin are discovered during shipment, it would be rejected by the authorities. Being of Israeli origin is also one of the top grounds for rejection during the process of product registration in the UAE. However, the abolition of the Boycott Law has opened up new doors of trading, and imports between Israel and the UAE.

The Ban on Israeli Trademarks in the UAE

Trademark registration in the UAE is regulated by the Trademark Office at the Ministry of Economy. The governing law is Federal law No 8 for the year 2002 amending the Articles of Federal Law No 37 for the year 1992. As per Article 24 of the Law, the Ministry will cancel the Trademark registrations, which Israel’s Boycott Office in the State has decided are similar or identical to Israeli marks.

The UAE trademark law in this regard prohibits the registration of any mark, logo, or emblem that are Israeli in origin. The law also bars dealing with trademark owners whom the Boycott Office has passed a decision prohibiting any deals with them. The UAE has abolished the Israeli Boycott Law and the trademark agents in Dubai hope that this drastic change would also reflect in the UAE Trademark Law soon.

Related: How to register a trademark in Israel?

How the Deal with Israel Affects Trademark Registration in the UAE?

The Abraham Accord is largely about the economy rather than politics. The normalization deal and the abolition of the Israel Boycott Law cements this argument. Also, the two nations have formally reached an agreement to boost financial services cooperation. On 1st September 2020, the UAE and Israel agreed to form working groups and committees to facilitate banking between the two countries. The agreement was signed in Abu Dhabi and it should be seen as the first step in a long list of other business deals that are likely to follow. Deals and agreements on more sectors are likely to follow which means more companies will be set up in both the UAE and Israel. The talks are still going on at the time of writing this article and more developments are awaited. However, the lifting of the ban on Israeli products has paved the way for more import, export opportunities. More Israeli products will be registered and sold in the domestic UAE market and the rise in the number of Israeli businesses and products calls for the need for strong Intellectual Property protection.

The UAE has strong laws and regulations to protect brands, logos, and designs through trademark registration. However, being one of the world’s most dynamic business hubs, the competition is very high. To beat the competitors as well as infringers, the Israeli businesses will need to protect their assets by conducting trademark registration in the UAE. However, the businesses will need to wait until everything gets formalized as per the law.

Trademark agents in Dubai have compiled a list of sectors that are likely to attract investments post the normalization deal. The list is not an exhaustive one as the discussions are going on.

Consult With the Best Trademark Agents in Dubai

The UAE-Israel normalization deal called the Abraham Accord and the further abolition of the Israel Boycott Law has opened the door for investments and cooperation between the two nations. Almost every major sectors are likely to receive the benefits of the new deal. Trademark agents at Jitendra Intellectual Property (JIP) expect that more imports and exports are likely between the two countries after the abolition of the Israel Boycott Law.